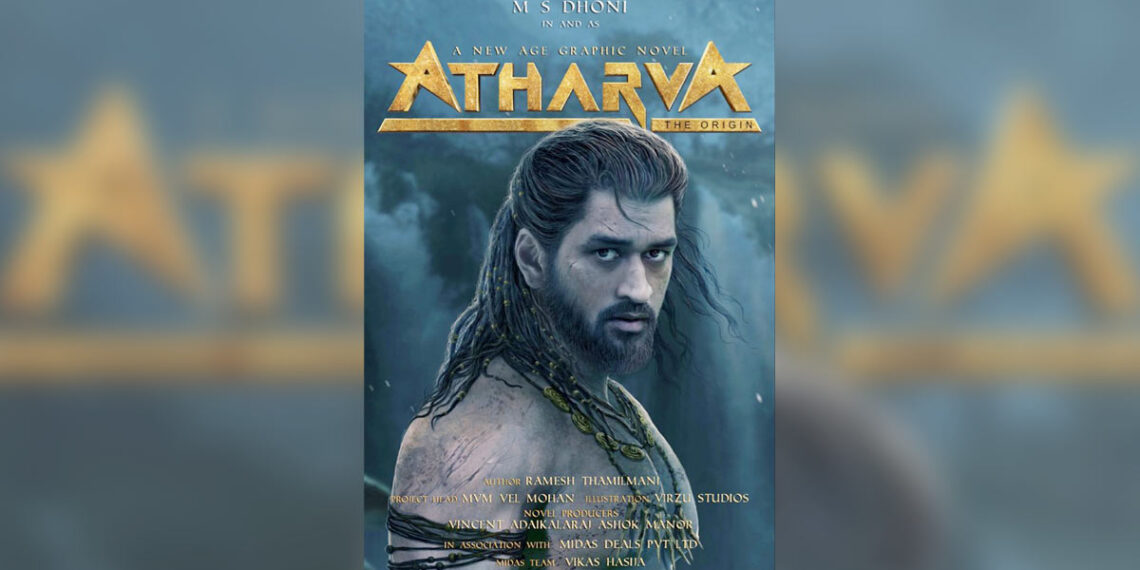 MS Dhoni, the former Indian captain known for his swashbuckling batting style and lightning-quick wicket-keeping, is poised to don a new hat, and a sneak peek has the internet buzzing. On Wednesday evening, Dhoni took to social media to reveal the first look from his upcoming web series, ‘Atharva: The Origin.’

“Happy to announce my new Avatar…..Atharva….,” he captioned the post. The mythical sci-fi web series, based on Ramesh Thamilmani’s novel, depicts Dhoni in a never-before-seen incarnation combating demonic entities.

The avatar of the former cricketer was shown facing an army of demons. ‘Atharva: The Origin,’ billed as a “new age graphic novel,” is an adaptation of debutant author Ramesh Thamilmani’s unpublished book of the same name. The online series is produced by Vincent Adaikalaraj and Ashok Manor. Dhoni Entertainment, the media firm created by Dhoni and his wife Sakshi Singh Dhoni in 2019, is supporting the upcoming series.

Talking about his project, Dhoni said, “I am thrilled to be associated with this project, and it is indeed an exciting venture. Atharva – The Origin is a captivating graphic novel with an engaging story and immersive artwork.”

You may also like – Meet Ashok Elluswamy, the first Indian Origin to Join Tesla’s Autopilot Team By Elon Musk

“We would like to ensure that we execute all the aspects of this universe and bring out every character and story to the screen, with as much precision as possible. Web-series fit our purpose better than adapting it into a feature film,” Sakshi said in a statement earlier.

The adventure of a mysterious Aghori and his quest to change the myth will be the focus of the series. According to the unpublished book, the Aghori has been captured at a high-tech facility and is revealing secrets. The truths revealed by Aghori have the potential to alter current misconceptions about ancient beliefs.

Dhoni appears in an animated avatar at his initial glance, engaged in a battle with an army of demons. Dhoni is depicted on the battlefield with bloodstains on his body and a fierce expression on his face.

Fans have filled the internet with reactions and posts about ‘Atharva: The Origin,’ ranging from comparing Dhoni’s energetic bare-chest look to Prabhas from SS Rajamouli’s ‘Baahubali,’ to expressing their delight.

This isn’t Dhoni’s first move into the film or entertainment world. Everyone is familiar with Dhoni’s biopic, MS Dhoni: The Untold Story, which was released in 2016 and was a big success. Dhoni, on the other hand, is stepping into the field of visual books, where he will portray one of the characters. It’ll be fascinating to see how this graphic novel develops.

The upcoming series has piqued the interest of fans throughout the country, as the former international cricketer will be seen in OTT for the first time.

Dhoni is currently thinking with the CSK think tank in order to put together a strong future team. Captain Cool is expected to attend the IPL 2022 super auction in Bengaluru on February 12 and 13, where he would be seated at the Chennai Super Kings table.

Furthermore, Dhoni, who retired from international cricket in 2019, appears to be branching out into new areas, one of which is Atharva.