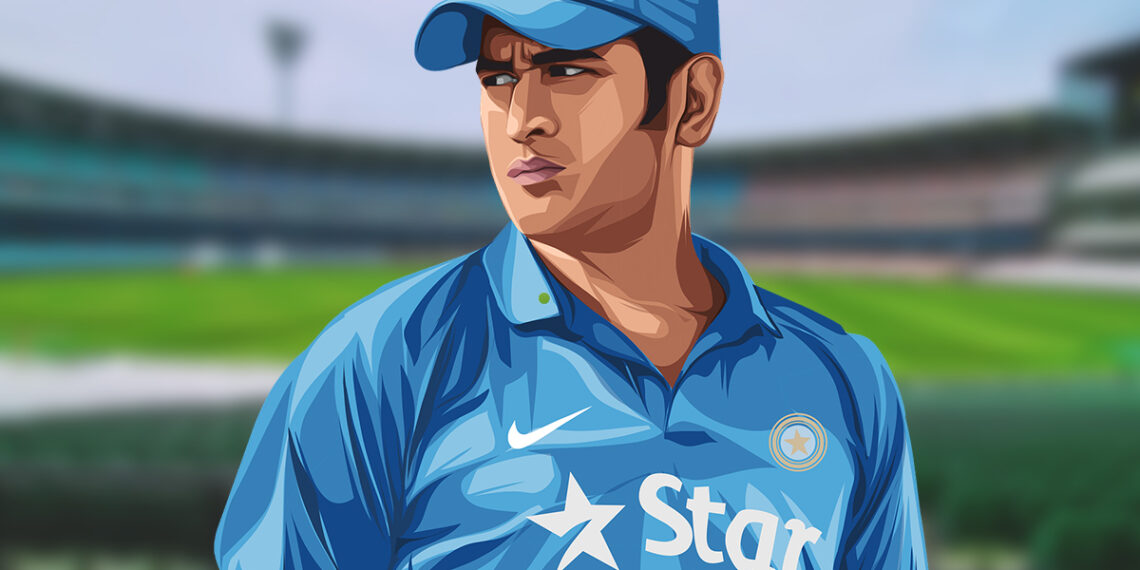 MS Dhoni studied in DAV Jawahar Vidya Mandir, Ranchi, Jharkhand. He surpassed in various sports like football, badminton and cricket during his school days. He played as a goalkeeper for his football team, and for a local club, he played cricket.

During 1995-1998 at the Commando Cricket Club, Dhoni’s wicket-keeping skills were awe-inspiring that he was selected for Under-16, Vinoo Mankind Trophy Championships, 1997-1998. He played that session well.

Dhoni focused on cricket thoroughly after completing high school. Dhoni worked as a Travelling Ticket Examiner (TTE), at Kharagpur Railway Station, under the South Eastern Railway of West Bengal, in 2001-2003.

In his early 20s, Mahendra Singh Dhoni fell in love with Priyanka Jha.

Meanwhile, Dhoni was trying hard to get picked up in the Indian team; Priyanka died in an accident in the year 2002. Dhoni also dated Lakhsmi Rai, a South Indian actress. On July 4, 2010, MS Dhoni married Sakshi Singh Rawat, his schoolmate, of DAV Jawahar Vidya Mandir, studying hotel management, as a trainee at Taj Bengal Kolkata, India.

A baby girl, Ziva, came into their life on February 6, 2015. MAHI was in Australia at that time, and the Cricket World Cup 2015, was a week later. MS Dhoni did not come back to see his family during that period, and he said, “I am on national duty; other things can wait”.

Career of Mahendra Singh Dhoni and his milestones

Mahendra Singh Dhoni played club cricket and for the team of school cricket, till 1998. Deval Sahay gifted his Rs 50 for every six in Sheesh Mahal tournament cricket matches. Later Deval Sahay selected him for The Central Coal Fields Limited (CCL). The CCL selected MS Dhoni for their team in 1998. CCL shifted to A division with the help of remarkable performance by MS Dhoni. Deval Sahay was touched by the dedication and the skills in cricket of MS Dhoni and propelled for his selection in the team of Bihar. At the age of 18, Dhoni was selected in the senior Bihar Ranji Team in 1999-2000. Unfortunately, the U-19 team of Bihar couldn’t make you through the finals. MS Dhoni was later picked up for the CK Nayadu trophy of East Zone, U-19 team. Although Dhoni finished last in the tournament, the East Zone wasn’t able to win one match.

MS Dhoni gained popularity for his hitting-hard batting style and lower order contribution in 2002-2003 while playing for Ranji Trophy and Deodhar Trophy from the team of Jharkhand.

Dhoni was selected over Deep Dasgupta, an International Cricketer, to represent East Zone in the Duleep Trophy Finals. The BCCI initiated a small town talent spotting campaign(TRDW) where Mahendra Singh Dhoni was identified by Prakash Poddar, former Captain of Bengal in the 1960s, sent a report to the National Cricket Academy.

Mahendra Singh Dhoni is a wicketkeeper and a right-handed batsman. He was initially in a non-attacking mode which he changed later due to his responsibility as a captain. He was also known for his fast running between the wickets. The famous Helicopter Shot technique was appreciated and loved by everyone he learned from his childhood friend and fellow player Santosh Lal. Apart from being a super batsman, his wicket-keeping skills were widely appreciated by various experts. The world record for the highest number of stumping by a wicketkeeper is bagged by MS Dhoni. He is also seen as a medium-fast bowler of the Indian team.

Apart from batting, he is widely appreciated for his wicket-keeping skills by several experts of the game. He is the quickest wicketkeeper when it comes to stumpings. He holds a world record for the highest number of stumpings by any wicketkeeper. He sometimes bowls as a medium-fast bowler for the Indian Cricket team.

For a Zimbabwe and Kenya tour, Dhoni got picked up for the Indian A team. Dhoni bagged 7 catches and 4 stumpings against Zimbabwe at Harare Sports Club. MS helped the team India, with a half-century, to hunt the target of 223 runs, against Pakistan, in a tri-nation tournament with Kenya, India A team and Pakistan. In 6 innings, with an average of 72.40, his total was 362 runs. His magnificent performance was able to catch the attention of Sourav Ganguly: the Captain of the Indian Cricket Team at that time, and Ravi Shastri.

Dhoni got picked for the Bangladesh tour in 2004/2005 for the ODI team, after India A team. It was the debut match of Mahendra Singh Dhoni, but for the duck, he was run out. For the ODI series against Pakistan, Dhoni was later selected, inspite of playing an average series against Bangladesh. In 123 balls, MS Dhoni scored 148 runs. He became the highest scoring Indian wicketkeeper in the second match of the series.

After India A team, Dhoni was selected in the ODI team for the Bangladesh tour in 2004/05. In his debut match, Dhoni was run out for the duck. Despite playing an average series against Bangladesh, Dhoni was picked for the ODI series against Pakistan. In the second match of the series, Dhoni scored 148 runs in 123 balls and made a record for the highest score by an Indian wicketkeeper.

In 2005, October-November in Sri Lankan Bilateral ODI, MS Dhoni played the initial two matches. In the third ODI, at Sawai Mansingh Stadium, Dhoni’s order to number 3. Against Sri Lanka, Dhoni scored 183 of 145 balls, which was unbeatable, and it became the winning cause of team India. Man of the series was awarded to him. A B-grade contract from BCCI was received by Mahendra Singh Dhoni in the year 2015.

Dhoni scored 72 runs from 46 balls in the third match against Pakistan in a series, which helped the Indian team to head the series by 2-1. Dhoni achieved 77 runs from 56 balls in the final match, assisting India to the victory of the series by 4-1. Mahendra Singh Dhoni was ranked as the number one batsman in ICC ODI Rankings, leaving Ricky Ponting behind, on April 20, 2006. In DLF Cup 2006-2007, 2006 ICC Champions Trophy, the performance of the Indian team was lacking.
In 2007, Cricket World Cup, in the matches with Bangladesh and Sri Lanka, Dhoni got out for a duck and India was crashed out from the tournament in the first round itself. His house got trashed by activists of JMM because of his poor performance in the 2007 World Cup, and police protection was provided to Dhoni’s family.

For the series against South Africa and England, Dhoni was declared as the vice-captain of the ODI Indian team. An A grade contract was received by Mahendra Singh Dhoni from BCCI. In 2007, for the World T20 matches, MS Dhoni was voted in as the Captain of the Indian team. Dhoni shared a record of most dismissals in an innings ODI, with his idol Adam Gilchrist, in September 2007.

In 2009, MS Dhoni became the first ranked ICC ODI Batsman. In a series between India and Australia, in the second ODI, Dhoni had 124 runs from 107 balls, and 71 runs off 95 balls. In the third ODI, Dhoni scored 71 runs off 95 balls. In the Champions trophy, 2009, against West Indies, Dhoni was able to get his first wicket in international cricket.

Dhoni-led team India to victory in 2011, Cricket World Cup, by chasing Australia and Pakistan in quarter-finals and finals. With a target of 275, Dhoni helped India win against Sri Lanka in the finals with Yuvraj Singh and Gautam Gambhir. With a score of 91(not out) and a historical six, Dhoni finished the match. Dhoni was awarded as the Man of the Match for his magnificent performance in the 2011 World Cup.
In 2012, for a bilateral series, Pakistan toured India for the first time in five years. India lost it by 1-2 after the World Cup.

India won the ICC Champions Trophy in 2013, where, in the history of cricket, Dhoni became the only Captain to date to profess all the ICC trophies. Moreover, after Sachin Tendulkar, Dhoni became the second Indian cricketer to score 1000 and more runs in ODI against Australia.

In the same year, India had to face defeat in South Africa and New Zealand tours in 2013-2014. On the other hand, India won the ODI series against West Indies by 3-1 in England and 2-1 in India in 2013- 2014.
Dhoni became the first Indian Captain to have victory over all group stage matches in the 2015 Cricket World Cup. Still, inspite of a great start, India could not win the tournament of the 2015 Cricket World Cup. It lost the title eventually to the champions-Australia.

In January 2017, Dhoni stepped down as the Captain of the Indian Cricket Team from the limited-over formats.

Dhoni had a healthy score in the ODI home series against England. Dhoni was named a wicketkeeper of the ‘Team of the Tournament, 2017 Champions Trophy and ODI XI of the year Cricbuzz. Dhoni became the first wicketkeeper to have 100 stumpings during the ODI against Sri Lanka in 2017. India toured Pakistan in 2006, at Faislabad, and Dhoni had his maiden century from 93 balls.

The last test series of Mahendra Singh Dhoni was played against Australia. He captained the team for the second and third test matches in 2014-2015. After the third test in Melbourne, Dhoni announced his retirement from the Test format. Dhoni broke the record of Kumar Sangakkara for stumping with 134 in all formats.

Dhoni contributed his 44 runs to support India’s victory in the first-ever win over Australia, on February 12, in the year 2012. As a result, ICC named Dhoni as the wicketkeeper and Captain of the ‘Team of the Tournament’ of the T20 World Cup.

The 2019 Cricket World Cup was a bit perplexing. Dhoni played well against West Indies, Australia and South Africa. Still, his strike rate against England and Afghanistan was not appreciable, and he had to face a lot of criticism. Dhoni scored a half-century in the second innings against New Zealand. He was run out at a crucial stage, where the World Cup run for India also ended.

The ban on Chennai Super Kings got uplifted in 2018, and the team was back in action in the IPL. Dhoni was again approached by CSK to lead the team. The session proved to be one of the strongest seasons in the history of IPL. Still, Mumbai Indians were able to capture the title.

Dhoni holds the record of playing 332 matches, which is the highest number of International matches as a Captain.

In 2011, Mahendra Singh Dhoni was awarded lieutenant-colonel, an honorary rank in the Indian Territorial Army to contribute to cricket. Dhoni accomplished a two-week stint with the Indian Army in Jammu and Kashmir region in the year 2019.

Forbes magazine ranked MS Dhoni as one of the highest-earning sportsmen in the world in 2012. ‘Mahi Residency’ is a hotel owned by MS Dhoni in Ranchi. According to various sources, his approximate net worth is US$103 million.