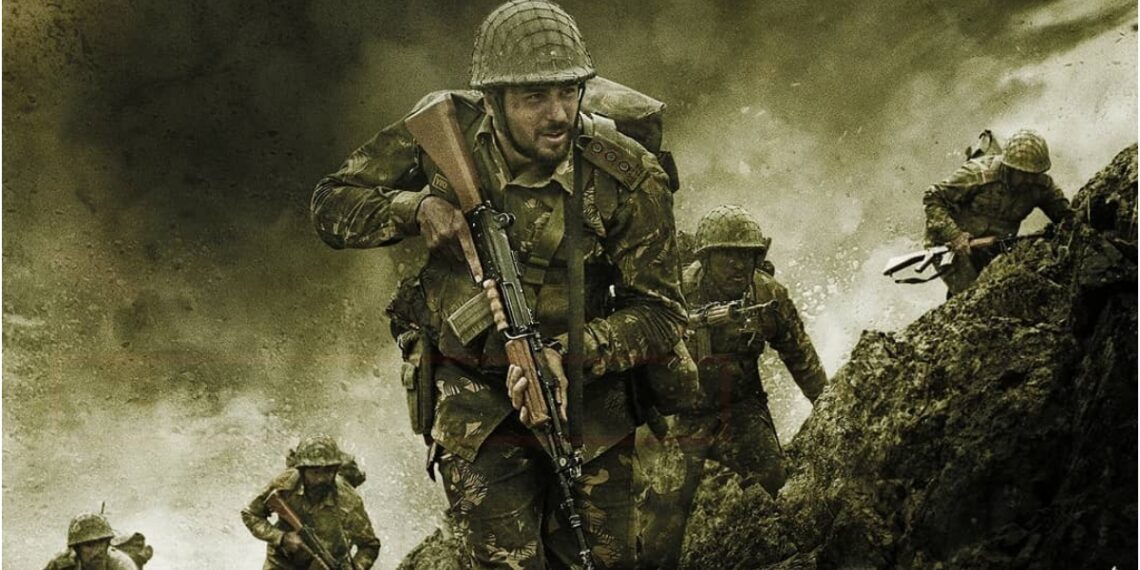 “Yeh dil mange more”– Captain Vikram Batra. Shershah film is based on an Indian war, held back in 1999. It is said to be the best Indian war film till date. You must watch it if you haven’t. The film was released on August 12, 2021.

Why? Because you’ll cry…

This film is about real-life hero Cap. Vikram Batra, who sacrificed his life during Kargil War and his heartbreaking incomplete love story.

Why depicting a war film?

To begin with, every individual should be made aware of the reality and suffering that a soldier goes through to keep our nation safe. Both mentally and physically.

Yet, they stay strong and fight for their nation keeping their lives in line.

On the other hand, people love watching war films and movies. The a real-life story depicts emotions and reality, which eventually attracts your interest.

And who doesn’t want to know the history behind a war? A war that can lead to peace or devastate a country.

This film includes all the themes of a battle scene like soldiers, blood, sacrifice, survival, combat, the effect of war on the society mostly to the family members of the soldiers, action, victory, inhumanity of a war, moral issues, love for nation, death and romance too.

Shershah | The Film About a Real-Life Hero.

This action movie is based on a real-life story with no unnecessary Bollywood masala but only the reality of a hero, whom we didn’t recognize until today. This must be the best Patriotic Indian movie released till date.

A story of a soldier, named Captain Vikram Batra. Later, He was awarded with the Param Vir Chakra, for his bravery and actions during the Kargil War, in 1999.

This movie was directed by Vishnu Vardhan and written by Sandeep Shrivastava. The movie depicts the story of Vikram Batra, from his first enrollment in the Indian army until his death in the Kargil War.

An Indian actor, Sidharth Malhotra plays the role of Vikram Batra and Kiara Advani as his lover Dimple Cheema. Moreover, hat’s off to these actors who made the film successful with their amazing acting.

They’ve performed their role very well. Beautifully portrayed the feeling of love, devotion and courage which connects with the audiences.

Biopic of Captain Vikram Batra| Why named it Shershah?

Shershah – means the Lion King. It was a code name given to Captain Vikram Batra, when he was promoted to higher rank as Captain during the Kargil War.

During the Kargil War of 1999, the Tv media were broadcasting the news of how the Indian army had accomplished goals, one after another.

The Pakistani soldier threatened him by saying “Shershah, you have come? Don’t try to come up”, and challenged him.

Our Indian soldiers went wild, how dare a Pakistani troop challenge us?So, that’s when everything began.

Also, his code name Shershah was famous among the soldiers, and enemies and was mostly feared.

The Plot | How the story progressed and ended with victory.

The story starts with Vishal Batra, narrating the story of his twin brother Vikram Batra. As a kid Batra was fearless and was known for his fearless nature. A TV series, Param Vir Chakra, inspired him to join the Indian Army.

As the story progresses, he gets recruited into the Delta Company, 13th battalion, Jammu and Kashmir and is posted to Sopore, as a lieutenant. At the age of 23.

After a few scenes, back at the base Batra receives a letter from his girlfriend Dimple Cheema. Then the movie flashbacks to when they met and fell in love, and decided to get married, back in 1995.

What do you think? What would have happened if he joined the Merchant Navy and not Indian Army?

Well, but his friend Sunny convinces and stops him from giving up his dream. Also, Batra and Dimple continue their relationship.

Back to home. But in May 1999, Pakistan’s General Pervez Musharraf, began offensive actions to capture Kashmir and sent troops to the mountain peak in Kargil.

So, Captain Batra decides to return to the base, that’s when he makes his famous promise to his friend Sunny “I’ll either come back after raising the Indian flag in Victory or return wrapped in it. But I’ll come back”.

Later, when Kargil War approached, he was promoted to rank of Captain, and his delta company was assigned to recapture the crucial mountain peaks, the peak 5140.

And so on, they were challenged by the Pakistani troops and the war began. Captain Vikram and his forces intended to surprise the opponents from a height of 17,000 feet. But they were pinned down.

After struggling, resulting in multiple casualties and three weeks’ war, 13 JAK RIF successfully recaptured the peak 5140 on June 1, 1999. They kept “Yeh Dil Mange More ” as their victory code. A famous popular Pepsi’s slogan, which Vikram used to express his desire to achieve more.

With the success, the Army was again tasked to recapture point 4875. Which might lead to the end of the war.

Before leaving the base camp he called his worried parents and said, “Ek dum fit hook, fikar mat karna” (which means, I’m absolutely fine. Don’t you worry)and that was the last call.

They started attacking on point 4875 and due to rough icy terrain with 80 degree steep and multiple enemy bunkers at 16,000 feet as they approached the enemy, they took massive casualties. Eventually they successfully destroy four enemy bunkers.

But unaware of the 5th bunker they take heavy fire. And that is the moment, when Batra asked Rifleman Yashpal to use a Pakistani RPG-7, but before he could a sniper hits Yashpal and injures his leg in an explosion.

As Vikram Batra sees that rushes to rescue Yashpal, Subedar begs him not to go and says he will go instead but Batra says “Tu baal-bacchedar hain, hat ja piche” (which means, you have children, step aside).

As he successfully rescues Yashpal, but after taking massive grenades and bullets in his chest he faints.

He sees Subedar Raghunath Singh take the command and charge the final bunker; he takes his last breath as he sees his men hoist the Indian flag in victory.

They successfully captured the point on June 20, 1999 at 3:30am. As India recaptured the peaks and won a decisive victory, they lost two of the bravest soldiers. Captain Vikram Batra and Captain Anuj Nayyar.

And on the other side, in one of the scenes Dimple says she will not get married to anyone if it’s not Batra and until today she’s unmarried, and is working as a teacher.

As Batra died in the war, his family asked her to get married and settle but she said, all she needed was his memories.

The Funeral was carried in Palampur, where his devastated mother said “Maybe there was a reason why God gave me twins – one he had marked for the country and one for me”.

Let’s start from the very beginning, when and where he was born. Captain Vikram Batra, he was born on 9th September 1974, in Palampur, Himachal Pradesh. He was an officer of the Indian Army.

He fearlessly led the most difficult mission, a warfare operation in Indian history, and laid down his life. He was awarded with the most prestigious award for valour, the Param Vir Chakra.

About his family, he was the third child of Girdhari Lal Batra and Kamal Kanta Batra. His father was a govt. school principal and mother, a school teacher. He was the eldest of twin sons.

They were nicknamed as Luv (Vikram) and Kush (Vishal), as their mother was a devotee of deity Rama. He also had two sisters, named Seema and Nutan.

His education: he enrolled in DAV public school and studied up to middle standard. Later, he joined Central School Palampur, from where he received his senior secondary education.

He was a brilliant student, interested and excelled in sports. He also represented his school and college in many sports like table tennis, karate and many more.

At the All India KVS nationals in table tennis, both twins represented their school. He was also a karate green belt holder.

And for the rest of his life story, watch the movie…

Apart from the movie:

On July 14, Prime Minister Atal Bihari Vajpayee proclaimed the operation a success, and on July 26, 1999, the operation was formally declared closed.