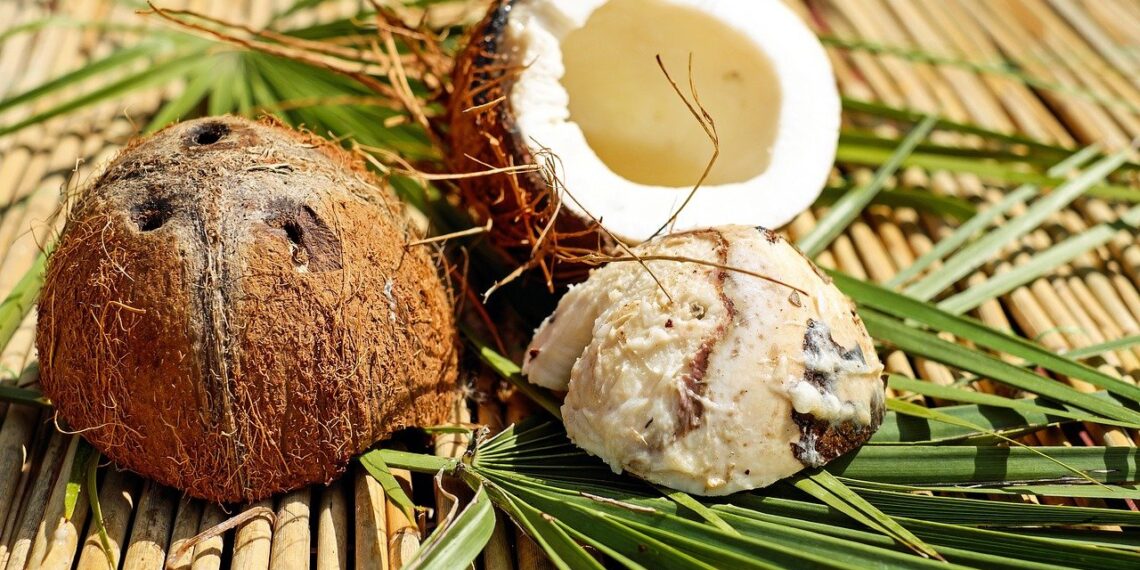 Coconut tree scientifically known as Cocos nucifera is from the palm tree family, also known as Arecaceae. It is the only living species of the Cocos’s genus. The whole coconut palm, along with  the  seed,  the  fruit,  can  be  refered  as  coconut.  The  name  coconut  is  derived  from  a Portuguese  word “coco”, meaning “head” or “skull”, which resemble facial features of the fruit after three indentation. They are generally found in coastal and tropical regions.

Coconut can be categorised in two seperate population- the Indo-Atlantic coconuts, and the Pacific coconuts respectively. Indonesia, the Philippines, and India combined are the producers of coconut, with almost 75% of total world’s supply.

The “coconut meat”, “coconut flesh”, or “coconut kernel”, is the edible white, fleshy part inside the seed (endosperm). “Malauhog”, (“mucus-like”) where, the coconut is around 6 to 7 months old, “Malakanin”,(“cooked rice-like”) refers to young coconut of around 7-8 months old

and “Malakatad”, (“leather-like”) refers to a fully mature and grown coconut meat of around 8 to 9 months old. They are the classification of coconut meat, depending upon their maturity. The terminology is derived from the Tagalog language. As there is no technology to determine the maturity of unopened coconut, the maturity or the age is difficult to determine. But size and colour can assist with that. Young coconuts are generally smaller and brighter in colors, while mature coconuts are browner in colors and larger in size.

Both immature coconut, Malauhog and Malakanin can be eaten as drinks, pastries salads and desserts,  like buko pie and es  kelapa muda. Mature Malakatad coconut  meat  are processed before consumption as it has a tough texture. Freshly shredded mature coconut flesh is used in extraction of coconut milk. It is also used for garnishing in various dishes.

“Desiccated coconut” is the grated coconut that is baked or dehydrated. It is generally used in confectionary industry and bakery, as it provides longer life compared to freshly grated coconut. Dried coconut is used in many chocolate bars as fillings. Coconut flesh can be cut into large pieces and strips, and dried, with salt to make “coconut chips” or “coco chips”.

Cuisines of regions where coconuts are easily available, coconut milk, a widely used ingredient. Coconut milk, is obtained by pressing, grated coconut flesh, with hot water, which enables it to

extracts the coconut oil, proteins, and aromatic compounds. It is also used for cooking purpose. It contains 5% to 20% fat, and coconut cream contains 20% to 50% fat. Mostly it is saturated fat, with a major fatty acid, as lauric acid.

Coconut milk powder, a protein-rich powder can be extract and processed from coconut milk. Coconut water

During  the nuclear  phase of  development,  coconut  water  serves  as  a  suspension  for  the endosperm of the coconut. Later, it develops and matures onto the coconut rind in the cellular  phase.  Mature  coconut  have  less  liquid  than  young,  immature  coconuts.  Coconut vinegar can be obtained from coconut water.

Coconut water can be drunk fresh. Per 100-gram serving, coconut water contains no significant essential nutrients, but contains 19 calories. Coconut flour is also been developed for  baking, to combat malnutrition.

“Palm  cabbage”  or  heart  of  the  palm,  of  adult  plants  are  edible  and  is  a  rare  delicacy,  as harvesting the buds, actually kills the palms. Hearts of palm are eaten as salads, and is called “millionaire’s salad”.

Just like any other liquid oil, like vegetable oil, coconut oil is generally used for cooking purposes, specifically for frying. In solid state, coconut oil is similar to lard or butter.

It can also have negative health effects, for consuming other forms of saturated fat like palm oil, including butter. It can raise total blood cholestrol level and cardiovascular risk, if consumed chronically.

Coconut butter is generally describe as solidified coconut oil, but it is also called a creamed coconut.

The fiber obtained from the husk of coconut, is called coir. For making brushes, mats, ropes, doormats, and sacks. It is also used in caulking for boats, and stuffing fiber for mattresses. It is used in orchid mix and potting compost, in horticulture.

The husk and shells are used as fuel and source of charcoal. To remove impurities, the shell of the coconut is considered to be very effective, as it contain activated carbon.

The fresh husk from a browned coconut can serve as a body sponge or dish sponge. During 17th  to  19th  century,  to  serve  small  quantities  of  beverages  in  countries  like  as  Mexico, Guatemala, and Venezuela, half shell of coconut was used.

Coconut shells were also used as bowls and various handicrafts, including buttons carved from dried shell, in Asia

In India, in parts of South India and Northeast India, the husks are burned for smoke to repel mosquitoes.

In India, Indonesia, Malaysia, the Maldives, and the Philippines, the midribs of coconut leaves which are usually thick, are used for making brooms. The green of the leafy portion is stripped away, leaving behind the veins further tied together, after drying them,  to form a brush or broom.

The leaves can be used to make different material like baskets for drewing water from the well and   roofing thatch,   they   can   be   made   cooking   skewers,   into   mats,   and   as   well   as kindling arrows.

For lime, the dried amd burned coconut leaves serves as harvested. In India, especially in the states  of Kerala, Karnataka,  and Tamil  Nadu,  coconut  leaves  are  woven  to  build  wedding marquees.

For building small huts, bridges coconut timber is used as they are preferred for their straingth, straightness,  resistance.    As  a  substitute  of  endangered  hardwoods,  coconut  timber  is increasingly being used as it is ecologically sound.

A piece of root can be used as a toothbrush. The roots are used as traditional medicine for the treatment for dysentery.

10 Facts about Coconut that will amaze you

Across 80 different countries, there are over 150 species of coconuts. Coconuts are not nut, but drupes. Other drupes include plums, cherries, almonds, and olives.

The trees can be both tall and dwarf. Tall trees grow to up 98 feet, whereas dwarf trees are generally between 20 to 60 feet in height.

A new tree takes 5 to 6 years to bear fruit, while it takes 15years for full fruit bearing. The trees develop both male and female flowers which can generally be distinguished by its size. Female flowers are usually larger in size.

It takes almost a year for the fruit to become fully ripe.

Each year, about 61 million tons of coconuts are produced.

Coconuts can survive up to 100 years, in the wild.

A coconut tree on average, produces 30 fruits each year.

Coconut tree is often refered as “tree of life”, due to its usefulness. Coconut can be used for food, fuel, folk medicine, cosmetics, and building materials, including various other uses. Flesh from.inner part of matured coconut seed is extracted. As well as coconut milk is produced from the coconut, which is almost a regular part of diet for many people in subtropical and tropical areas. Coconut water is actually the endosperm of the fruit, which is a clear edible liquid, making the fruit unique and distinct from all.

The multipurpose coconut can be processed for the production of oil and milk can be extracted and processed from the matured flesh, the hard shell can be used as charcoal, and coir can be made from the fibrous husk. Copra is the dried coconut flesh from.where, actually the oil and milk for cooking and cosmetics is extracted. Coconut vinegar, fermented palm wine can be extracted from sweet coconut sap. The long pinnate leaves, fibrous husks and the hard shells can be used to.make a variety of products for decorations and furnishings purposes.

In the Western Pacific Austronesian cultures coconut has  cultural  and  religious  significance  and  it  is  featured  in  the  oral  traditions,  songs  and mythologies. It also had ceremonial importance in some societies. In the South Asian culture, coconut have religious significance, used in the Hindu rituals. In Hinduism, coconut is the basic necessity so any ritual, starting from worship of the almighty to weddings.